This part studies what has come to be called, “The Butterfly Effect.”  In a linear, Newtonian, clockwork system, an error in an input or processing step will yield a proportionately sized error in result.  But, as we know from prior parts in this series, our VUCA world today is a complex, non-linear world.  Thus, the effect of even an imperceptible disruption (intentional or accidental) will create a chain of events that can magnify the initial disturbance exponentially. 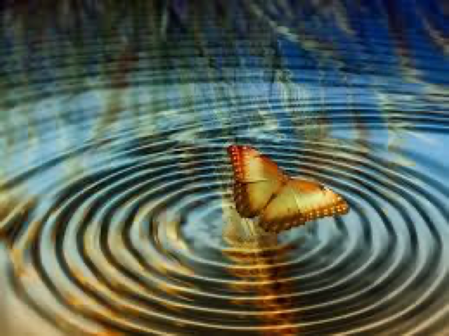 Does the Flap of a Butterfly’s Wings in Brazil Set Off a Tornado in Texas?

Edward Lorenz was working on weather forecasting algorithms at MIT in 1961.  While events such as Haley’s Comet could be precisely calculated decades in advance, and tides and eclipses had surrendered to scientific prediction long ago, weather remained elusively tricky.  Using then cutting-edge computers to run simulations, he was hoping to find Newtonian, clockwork determinism in the Earth’s climate.

One day, he needed to reexamine a particular simulation.  Because such simulations are complicated and huge, and given the state of scientific computing in 1961, they took a long time to run.  So, rather than recreating the simulation in its entirety, Lorenz took a shortcut.  In his re-run, he picked up the simulation at a point about halfway through.  At this point the simulation needed the result of an algorithm from an earlier code section.  The result of this algorithm had been printed out in the earlier simulation, so, in his shortcut, Lorenz simply keyed in the numbers from the printout of the previous simulation.  This would make sure that the initial conditions of the two runs was exactly the same.  Or so he thought.

Not only was the result of the second run not an exact duplicate of the first, Lorenz found that the new result varied so wildly from its predecessor that it seemed almost random.

Assuming it was an error in the code, he spent weeks looking for the bug. Comparing the code of two simulations found that they were, indeed, exactly the same, thus should have produced the exact same results.  Yet, the results varied wildly.

Eventually, he was able to conclude that the error wasn’t in the code or the machine; he discovered that it was in the data.  The two “identical” simulations were actually different; almost imperceptibly different, but different.

The reason, Lorenz discovered, was that in the computer’s registers the algorithm’s product was actually stored with 6-decimal places of precision.  However, due to I/O limitations, the algorithm’s product was limited to 3-digits of precision when printed out.  What was stored in the early simulation as .506127, was printed, thus re-entered, as .506.

There was no error in Lorenz’s code; his program was correct.  However, this almost imperceptible rounding difference of .000127 led to dramatically different end results.

In a linear, Newtonian, clockwork universe, this difference would have been inconsequential, perhaps forecasting an eclipse a few minutes early or late.  But being a complex and non-linear system, weather is a more volatile and interdependent environment.  Tiny eddies of air can be influenced by even an imperceptibly small event (like the flutter of a butterfly’s wings) and these eddies can affect larger currents, which affect the way warm and cold fronts build.  The effect was the creation of a chain of events that magnified the initial disturbance exponentially, thereby completely undermining any attempts to make predictions.

Several years later, Lorenz presented his results in a paper that he titled, “Does the Flap of a Butterfly’s Wings in Brazil Set Off a Tornado in Texas?”  Thus, the phrase, ”the butterfly effect,” entered the world to describe the scientific phenomenon by which small changes compound to create big impact.

Agile leaders understand that leadership is not about making the quickest decisions, or the loudest decisions, or the most testosterone-fueled decisions—these are prescriptions for disaster in VUCA conditions.  Agile leaders are not timid or indecisive, but they are humble and recognize that the butterfly effect is another aspect of VUCA that renders linear thinking useless, and completely undermines any attempts to make predictions.