I know that they have their haters, but my family and I are unabashed Disney fans, and particular fans of their theme parks.  My fascination with Disney is on both personal and professional levels. 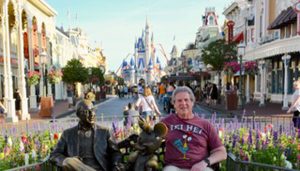 In fact, I recently returned from a Disney World vacation.  This is a photo of me sitting next to statues of Roy O. Disney (Walt’s brother) and Minnie Mouse on a bench near the flag pole in the center of Town Square in the Magic Kingdom.  This bench is a memorial to Roy, and it brings me to what I consider the best leadership advice ever.

If Walt was the heart of the company, Roy was the head. A creative innovator and risk-taker, Walt did not always have the best brain for business. With Roy’s guidance, however, the company was able to survive some rough financial patches that might otherwise have derailed it.

Development of EPCOT (Experimental Community of Tomorrow) began as a concept in the 1960’s.  In Walt’s words, EPCOT was to be “a community of tomorrow that will never be completed but will always be introducing, testing and demonstrating new materials and systems.”  His original vision was for a model community that would be home to 20,000 residents and test bed for city planning.  It was to have been built in the shape of a circle with businesses and commercial areas at its center, community building, schools, and recreational complexes around it, and residential areas lining the perimeter. Transportation would be provided by elevated monorails and people movers, with automobile traffic kept underground, leaving pedestrians safe on the surface.

Walt died in 1966.  Imagineering attempted to move from concept to design without him, and they struggled.  Other than the decision that they did not want to be in the business of running a real city, their original plans revealed indecision over the park’s purpose.  With their spiritual leader having passed, and with the park’s design going nowhere due to all of the creative and cognitive dissonance, Imagineering was in a deep funk and that funk radiated out to the whole Walt Disney World organization.  Then Roy stepped up and addressed the Imagineers.

OK, freeze that window because now I want to introduce you to the 17th century Japanese poet Matsuo Bashō (1644-1694).  He began his adult life in the service of his feudal lord as a samurai warrior.  But after his lord’s death in 1666, he abandoned his samurai status and became a traveler, observer of life, and the “Supreme Haiku Poet.”

Among the writings of Matsuo Bashō is what I consider the greatest leadership advice ever, and it is advice that Roy Disney employed to re-energize the EPCOT Imagineering team following Walt’s death.

Although stated much more elegantly by Bashō, it may be translated into the following: