We’ve seen many articles recently about how our society is finally demanding change related to racial bias in policing.  We are seeing reforms proposed at local, state and national levels.  Some of these proposals are small and incremental in nature while others are radical transformations.  As is typical in change efforts, these reforms have been pushed for years by a relatively small group of passionate people, with limited success.  Before meaningful change can occur, a tipping point must occur, where the need for change must be understood and embraced by enough people in influential positions to make it happen.  George Floyd’s brutal and unnecessary death has shown the masses that there is a need for reform.  We have reached a societal tipping point. 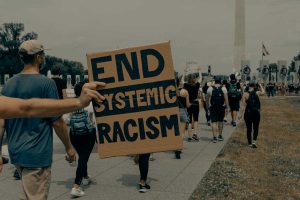 A System Resistant to Change

The Black Lives Matter movement has been pushing the need to change for years.  After the death of Jamar Clark in 2015, there was an 18-day protest outside the Fourth Precinct in Minneapolis.  Like many white people in the community, my family was moved to support the protests, but not fully invested.  We found a way to help by bringing meals to the protest area, but we didn’t actively participate.  We noticed other white families supporting in similar ways, stopping by the protest out of curiosity and to show support without actively taking part.  Additional protests continued, but without a large groundswell of influential policy makers, the drive for change couldn’t overcome the large barriers that resist it.  In the end, the Hennepin Country Attorney’s office announced they would no longer use grand juries in shootings involving police officers – a small and token change that didn’t attempt to address the larger issues.

Resistance to change is how our society is set up.  Our founding fathers knew they were creating a government model that was far from perfect in the late 1700’s and knew they couldn’t envision how society would change over the centuries.  Thus, the reason for the constitutional amendment as a way to make significant changes without ripping up the entire Constitution.  However, to approve an amendment, congress must pass the legislation by a 2/3 majority in both houses and ¾ of states are required to ratify it in their state legislatures.  In the last 55 years, only two amendments have passed, the 26th Amendment, which changed the voting age to 18 was passed in 1971.  The 27th Amendment, which requires congressional pay raises to take effect after the next election cycle, was ratified in 1992 – 203 years after James Madison first proposed it!  Change is slow.  Add to that the current era of political polarization, a Democratic House, Republican Senate and real change feels nearly impossible.

I expect we will see some form of watered-down police reform legislation pass this summer.  An ever-increasing number of Americans are aware that racism isn’t just a police issue, it’s embedded in all our institutions through personal biases and policies, both written and informal.  We are seeing corporations issue statements of support, create internal positions and update policies to address institutional racism.  These are positive steps, but like all change efforts, without a continued push from within they will fizzle out.  Our Federal government will keep to its practice of playing “whack-a-mole” by addressing the most pressing issue in the most minimal way, then move on.  Corporate statements of solidarity and will come and go, the newly created positions and policies will be marginalized, and we’ll return to the status quo.  However, it doesn’t have to be that way.  It’s time for us to implement some cultural agility.

We are seeing proposals for radical change at local levels and those changes are gathering support.  I expect we’re going to see real life examples of defunding police and alternative forms of policing very soon.  It will be important for us as a society to monitor those changes, determine what works and what doesn’t, and iterate/evolve on the changes based on measurable results.  This will require us to do something that we are terrible at as a society: objectively analyze the impact of the changes.  When we see positive results, we should do more of it.  When we see negative results, it doesn’t mean we retreat to our old, failed way of being.  We should consider what to further change to improve our results and try another approach.

In the protests, I saw a number of signs held by white people saying, “White Silence is Violence”.  I expect this blog will be mostly read by white people, and I expect some of you are offended by that statement.  Because white Americans make up the largest block of voters, because white Americans hold the largest share of power in government and business, because there are 250 million white people in this country, white Americans have the power to either force change or maintain the status quo.  By default, doing nothing will maintain the status quo, which perpetuates cycles of oppression and violence to black and brown people.  (For a better explanation, see this article from CBS news.)

Finally, like any Agile transformation, it needs to be done in a sustainable way.  The way to make this cultural moment into a cultural movement is to keep it going.  Many organizations are getting a boost in funding right now, but will they still have it next year?  Rather than a one-time gift, consider making it a recurring donation.  Think about what you can do now that you can sustain indefinitely.  If we can all do that, lasting change will follow.