There are multiple parties with a stake in the success of any organization. Businesses, for example, all have at least these five: customers, employees, owners, vendors, and the various communities to which they belong. Now, allow me to put forth a principle:

When an organization (a government, a business, a union, a charity, a religion, a family — any organization) adopts a pattern of decision-making where they create benefit for one stakeholder at the expense of another, they devalue the organization.

Freeze that window, and hold that thought. 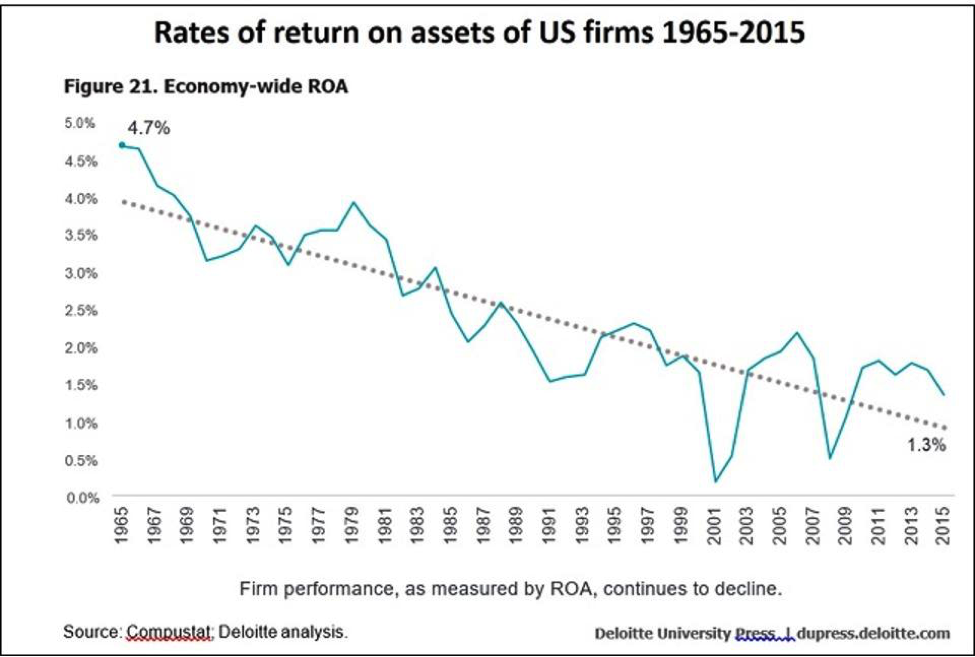 Image: Deloitte Center for the Edge

In his Forbes article, Shift Index 2016: Why Can’t U.S. Firms Innovate?, Steve Denning comments on the Shift Index 2016, which Deloitte had just issued, and closes with this hypothesis:

One also has to wonder whether the economic decline of the past decades is related to the shift in focus of firms since the 1970s and 1980s to maximize shareholder value as reflected in the current stock price, an idea that even Jack Welch has called “the dumbest idea in the world.” The result has been a focus on short-term financial gains at the expense of investment in goods and services for real human beings. Privately owned firms, both in the U.S. and Germany, have been much less affected by these pressures and have done better. Failure to pursue Peter Drucker’s foundational insight of 1954 that the purpose of a firm is to create customers has led to management that maintains the status quo and seeks financial gains through cost-cutting, greater efficiency and financial engineering, rather than taking advantage of new technological possibilities.

I have been in the business world since the mid-1970s; during my tenure I have seen two shifts converge during the late 1980s to mid 1990s that are a blueprint for trouble. One shift was in how corporate executives were compensated. Previously, CEOs were arguably guilty of ignoring all but the largest shareholders. So, the wizards of corporate governance changed the way CEOs and other top executives were compensated by dramatically increasing the variable component of their comp and tying it to stock performance. (I was going to say that they shifted a large portion of their comp from base to variable, but there was no shift; base stayed the same and variable was increased.)

At the same time, participation in the stock market shifted from the individual investor to mutual and other kinds of professionally managed funds. These are funds that are managed by dedicated professionals who are rewarded based on the short-term financial results of their funds. (And whose comp is mysteriously treated as capital gains rather than ordinary income, but that is an inequity in the tax system and a different issue for another day.)

Now don’t get me wrong, I am an unabashed fan of capitalism; as an economic system it has driven leaps in the quality of life and economic well-being of society at large unequaled by any other system. However, it does have a flaw that works against our best interest; leaving it unchecked by sensible regulation is pathological. Capitalism is amoral. It is blind to the good or evil it may be doing and simply locks on to the shortest path to profit, regardless of how much rubble it may leave in its wake. And as a result of the convergence of the shifts in executive comp and the shift in how stock market ownership is structured and managed, the decision-making elite are totally, and I mean “totally,” aligned to maximize short-term financial performance. Quarterly EPS has become the altar at which so many of them now worship and sacrifice.

The ripple effects have been legion. Chief among them, from my perspective, is the rise of the denominator manager and the value the company places on employees, shifting from fixed to variable. All of a sudden it became OK for a captain to throw members of their crew overboard if their ship wasn’t sailing fast enough, and when the ship does speed up, the captain is ridiculously rewarded.

This had several effects (i.e., more ripples). One is the rise of the mercenary executive —executives with more loyalty to their compensation than to the spirit and substance of their organization’s mission. Another is that, once companies ceased being loyal to employees, employees ceased being loyal to companies. And since it is employees that are the source of all invention, innovation, creativity, audacity, stability, and productivity, companies were making those qualities variable and transient, too. Of course, loss of those qualities won’t hurt you in the short term; in fact, they help. The result of losing those qualities only reveals itself in the long term — long after the instigating leaders have taken their money and run.

The other effect that the short-term thinking of reducing headcount through layoffs and outsourcing has had is that companies have systematically decimated the very consumers on which their success depends. Politicians will often refer to businesses and business people as “job creators.” They are not. They are certainly job providers, but they are not job creators. The job creator is consumer demand. If there is a dollar to be made, businesses will be there (and they’ll be there regardless of tax policy — tax policy makes a difference only in the speed with which businesses flock to the source of consumer demand, or the specific locale to which they flock, or if the profitability of the consumer demand is on the bubble). The trouble is, U.S. businesses have been systematically reducing the employment of the very consumer population on which their success and growth depends. Of course, loss of those employees/consumers won’t hurt you in the short term; in fact, it helps. The result of losing those employees/consumers only reveals itself in the long term — long after the instigating leaders have taken their money and run.

Jared Diamond, a polymath scientist about as far from being a businessman or economist as an educated person can be, drew this conclusion based on his studies of now defunct societies in history, such as the Norse in Ice Age Greenland, deforested Easter Island, and others:

One blueprint for trouble, making collapse likely, is a conflict of interest between the short-term interests of the decision-making elites and the long-term interests of society as a whole — especially if the elites are able to insulate themselves from the consequences of their action. That is, when what is good in the short-term for the elites is bad in the long-term for society as a whole, there’s a real risk of elites making decisions that will bring the society down in the long-term.

OK, back to the principle I posited earlier:

When an organization (a government, a business, a union, a charity, a religion, a family — any organization) adopts a pattern of decision making where they create benefit for one stakeholder at the expense of another, they devalue the organization.